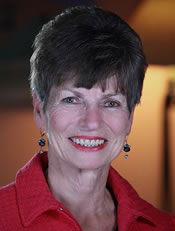 Ginita Wall understands the special problems facing men and women who are going through divorce and other transitions. For Ginita Wall, money isn’t a mystery, and this trusted CPA, CFP® practitioner and Certified Divorce Financial Analyst  has made it her professional focus to help people demystify financial issues.  So respected is her financial guidance that Worth Magazine named Ginita one of the most trusted financial planners in the country seven years in a row and the Association of Divorce Financial Professionals awarded her their national Pioneering Award in 2010.

A respected forensic accountant and fee-only adviser to people in the process of divorce, she originated the Second Saturday workshop on divorce. Almost 10,000 people have attended the San Diego workshop during the past 25 years, and it is now being replicated in communities across the country. Ginita received the KPBS “Local Hero” award in 2013 in celebration of Women’s History Month.

The author of eight books and three booklets, including The ABCs of Divorce for Women, It’s More Than Money – It’s Your Life,  and Love and Money: Financial Tips for Couples , Ginita’s mission is to empower people to succeed and prosper.  In 1988, Ginita started the non-profit Women’s Institute for Financial Education (WIFE.org) with financial advisor Candace Bahr. Now with over 55,000 members, WIFE.org is the oldest non-profit organization dedicated to financial independence for women.

Quoted in The Wall Street Journal, Business Week, USA Today, Money, and other financial publications, she has appeared on the NBC Nightly News, MSNBC, National Public Radio, CBS This Morning, the Discovery Channel’s Home Matters, and numerous other radio and television broadcasts.

Ginita Wall received her BA from Antioch College in Ohio, and she is a certified public accountant in New Mexico and California. Ginita lives and works in San Diego, California.